Diving For Denticles: a historical ecology

Why is it relevant for scientists to experiment with different methods of communicating research to different types of audiences?

Well! Have you ever said something to someone, and when they repeated it back to you it was nothing like what you meant at the time? Then you know exactly that communication is a complex exercise and that there is no surefire way to ensure every person understands what you say in the same way. That alone should be an exciting proposition, for it gives us a reason to go forth and explore strange new communication approaches, to seek out new methodologies and fresh ideas, to boldly capture the attention of those who really, really need to know this stuff.

Visual communication is one of the best ways to invite people to stop scrolling, stop wandering, and give us a moment of their time. The image is the bait; the hook is the presentation. Previously we’ve talked about how there are three main aspects to communication that we take into account: audience, context or place, and subject matter. There is a tension between the three, a feedback loop that informs the image-making process; sometimes the audience takes center stage: you will not make silent films for blind folk, for example. Sometimes the subject matter defines a project’s parameters. In the case of the particular case study we’re discussing today, it was the context that set the constraints.

The Future of Science Communication Conference accepted a proposal by Cooked Illustrations to visually showcase a piece of research. As such, whatever research we were presenting had to fit within the constraints of a Virtual Poster Exhibition. We know from experience that such sessions look at posters as a way to cram information in as a way to invite people to engage with ongoing projects, freshly-published papers, or soon-to-be-published research. Frankly, not the most visually engaging stuff, but it serves its purpose.

Same as in the wider digital environment, standing out is key. Posters are an interesting value proposition for science communication in that the image takes precedence, but the image alone cannot do a lot of the heavy lifting that is required for an audience to gain a deeper understanding of specific scientific matters. As such, a balance must be reached between text, illustration, and asking the audience the daunting task of going and looking at external resources.

The question for this project then was: Can an eye-catching interpretation of the research, and small soundbites of information, engage the audience to ask further questions and lead them towards longer-form articles?

Thus, we started drawing. But for Cooked Illustrations to even start that process, we must understand the subject matter itself. And that means reading the research, looking at a lot of wonderful photographs and testing our understanding of the subject matter by asking a lot of foolish questions of the scientist.

But before we get into how we made the poster, let’s talk about what the poster is all about. And, like most science, it starts with a question.

How abundant were sharks on Caribbean coral reefs before human impact?

That’s one of the questions UC Santa Barbara doctoral candidate Erin Dillon and her collaborators tackle in a new conservation paleobiology study published in Proceedings of the National Academy of Sciences.

To answer this question, the team needed to go back in time to gather data from an ancient coral reef. The task arduous; the location idyllic — clear blue skies, waters tinted green and blue, the scent of salt in the air and the rushing of waves. Nestled in western Panama, the Bocas del Toro archipelago is known for its complex history of human occupation, which has left a lasting imprint on the paradise-esque landscapes and surrounding marine ecosystems.

However, the team didn’t go to this archipelago for the sights above water, but for the secrets that lie underwater. Coral reefs are home to incredible biodiversity and provide ecosystem services for millions of people in coastal communities. Reefs are also special because they archive their histories as they accrete, providing a window into the past life that inhabited these bustling underwater cities. The ancient layers of reef are typically buried beneath the living coral. However, the serendipitous discovery of an exposed section of 7000-year-old fossil reef by STRI paleobiologist and co-author Aaron O’Dea in 2012 promised new insights into what was natural in the seas before major human impact. This site allowed the team to take large bulk samples (~9kg each),  enough material for analysis rather than the usual method of taking cores through living coral reefs, a method which provides a sequence of ecological data but often less material to work with.

The team had found their time machine.

Sharks are important for coral reef function. As mobile predators, they structure food webs, influence prey behavior, remove weak or diseased individuals, and connect coastal and pelagic habitats. Shark populations have undergone precipitous declines in many regions, yet it is rarely clear what shark abundance and diversity were like before human impact. To fill some of these gaps, Dillon seeks to understand the causes and consequences of changes in shark communities over the last several thousand years as well as the ecological roles that sharks played historically on intact reefs. These baseline data can also help managers and communities craft more appropriate shark management goals tailored to a local region.

To reconstruct shark communities through time, Dillon collected sediments from modern and fossil coral reefs. Reef sediments contain a treasure trove of skeletal elements from reef-associated organisms, including fish teeth and ear bones, coral skeletons, molluscs, sea urchin spines, and — our focus here — shark scales. These microscopic tooth-like scales, called dermal denticles, cover the bodies of sharks (and rays) and are continually shed like dandruff, leaving behind a record of occurrence that is preserved in sediments over millions of years. Denticles are not only incredibly durable, but they come in a variety of flavors that have different functions. Some denticles reduce drag and improve swimming performance, while others protect against abrasion with hard substrates. These different denticle types have distinct shapes and characteristics, which can be used to learn about the lifestyles of the sharks that shed them. Fossil denticle accumulations in sediments can thus be used with care to estimate the numbers and types of sharks in the ancient ocean.

To access this record, Dillon and her collaborators collected around 300 kilograms of reef sediments, or enough to fill multiple sandboxes. Given their tiny size, searching for denticles is like finding a needle in a haystack. Fortunately, Dillon was able to eliminate most of that metaphorical haystack before starting the hunt. She used acetic acid to dissolve the chalky reef sediments before meticulously sorting through the residue under a microscope to recover the denticles.

In addition to analyzing shark denticles, Dillon looked at other sources of complementary data. By collating archaeological evidence, historical narratives, local stories, ecological surveys, and fisheries records, she was able to create a timeline of perceived shark abundance over the last 4000 years along Panama’s Caribbean coast. She then interpreted these disparate data sources to explore the timing and drivers of the changes detected in the fossil record.

Historical narratives depict remarkable numbers of sharks in Bocas del Toro until around the mid-20th century. After that, Dillon noticed a decline in shark encounters that roughly coincided with the appearance of commercial, targeted shark fishing in Panama in the 1980s.

And this is where the two strands of research intersect, allowing Dillon to create a more detailed window into the ecological history of sharks before humans began using marine resources in Bocas del Toro. The fossil record revealed that denticle accumulation, and by proxy shark abundance, declined three-fold over time. Shark community composition also shifted. If you were to go snorkeling on these reefs a couple thousand years ago, not only would sharks have been a more common sight but there would have been relatively more fast-swimming pelagic species like hammerheads and requiem sharks. In contrast, nurse sharks are relatively more common today than they were historically. Historical records echoed these empirical observations and indicated that shark declines accelerated in the second half of the 20th century. These accounts also corroborated the selective removal of commercially-valuable pelagic species, which experienced the greatest decline over time in the fossil record. Yet, Dillon observed a reduction in all denticle types, including those found on species that are infrequently caught. This pattern suggests that both long-term harvesting as well as the loss of reef habitat and available prey contributed to shark declines in Bocas del Toro — a finding which offers important context for our current understanding of shark ecology and conservation in the region.

With the depth of information and knowledge in Dillon’s research, isn’t the resulting poster kind of reductive and simple?

Well, yes! And that’s kind of the point. Originally, everyone involved wanted to share more information. More data. More text! MORE! But that would just look terrible. The tension between subject matter and image-making that we mentioned above. To resolve this, we asked the question: what is this poster for? From the outset of the project, we had agreed that this illustration would serve as 1.) promotional material for social media marketing, 2.) showcase Cooked Illustrations’ services at the Future of Science Communications Conference, and 3.) help Dillon’s research reach a wider audience by presenting it in a more visually appealing format.

By looking at those three strands closely, it was obvious to the team that by minimizing the amount of textual information on the poster that it would interest some people’s curiosities. In the context of internet marketing, this is an easy proposition: just click on the link with the post! And, bam, you are redirected to either the original paper or an article like the one I hope you just read through.

This strand of thinking — where an image is the first stop in a multi-device, multi-platform educational journey — is one Cooked Illustrations is interested in pursuing further in the future. Perhaps QR codes linking to specific website articles? Maybe to audio recordings of the scientists explaining their research?

We won’t know until we boldly try to go further than those before us!

The Paper "Fossil dermal denticles reveal the preexploitation baseline of a Caribbean coral reef shark community" is published by PNAS. 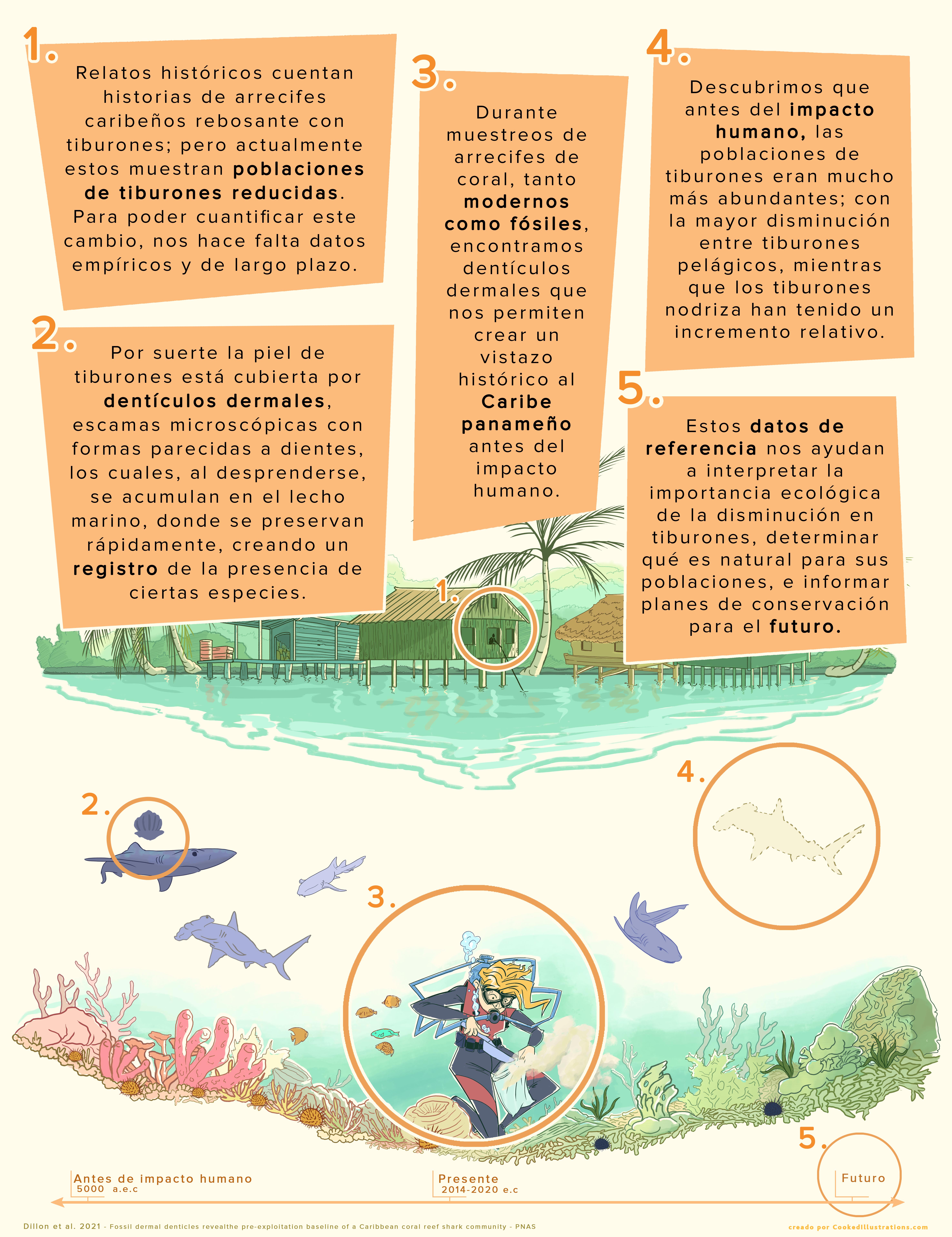 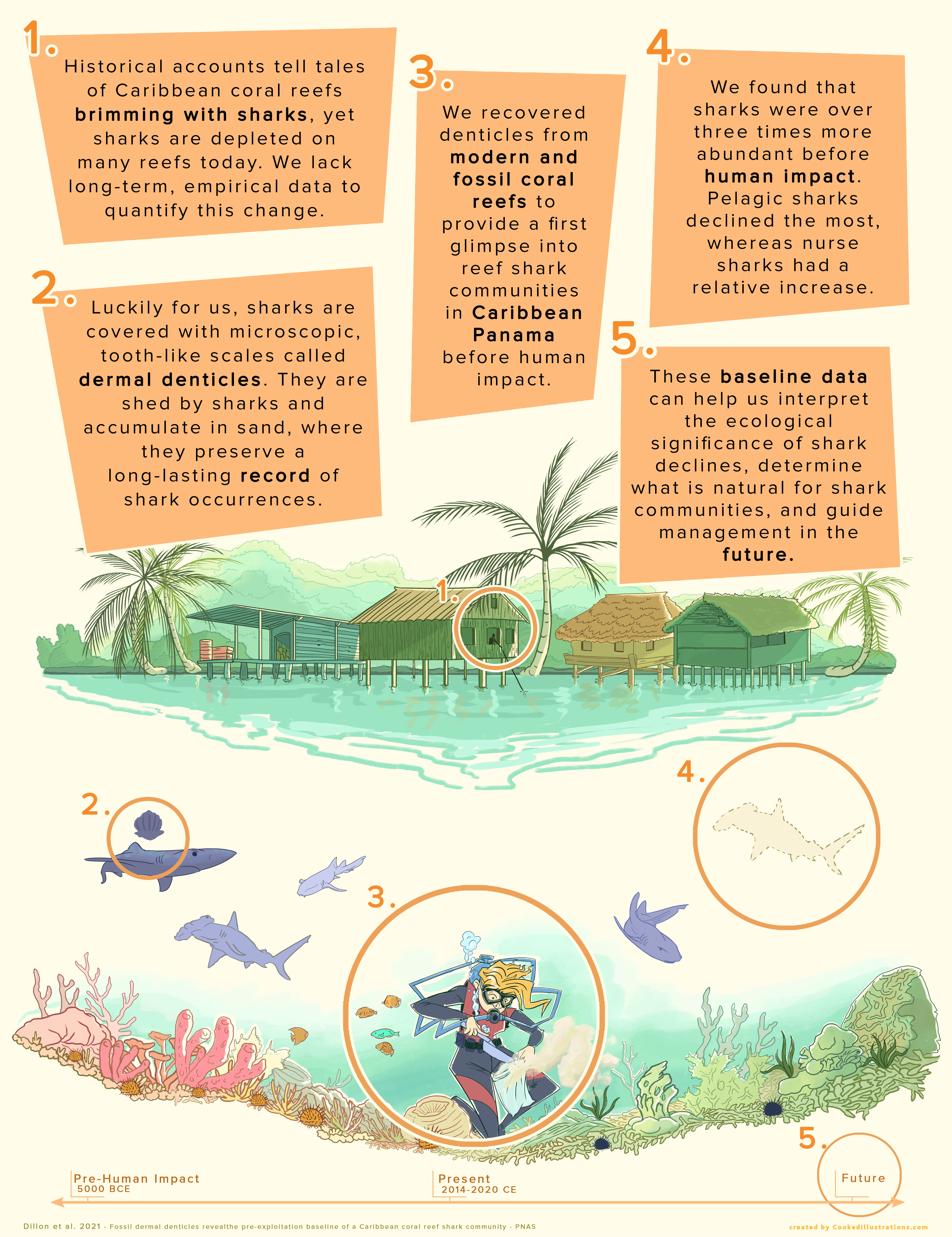