And why not, right? Research points to images having a higher chance of capturing our fleeting imagination. The first moment of encounter is the key for engagement, and it must be harnessed to ensure the information is transferred as efficiently as possible.

But to make an explainer comic, we first needed to know what Coade3 was trying to say. And to whom!

‍The core message of the company is that they are trying to stop frustration.

Not just any type of frustration, but the specific anger that results from a messy transfer of data from physical or local digital files, to a cloud-based system. Files lost. Security and data compliance thrown out the window. Your query says “dog” and the system brings up 1000 results saying “god”. The metaphor used was that of an elevator where individual unlabelled boxes full of files are transported up to the cloud. A system that can easily explode the moment someone presses all the buttons in the elevator. It is data chaos!

Search engines are just not fit for purpose, especially for Coade3’s clients.

As you can see, we couldn’t resist using this first idea as a starting point to understand exactly what Coade3 needed to communicate. A great starting point, but not the whole story.

In Coade3’s experience, presenting Pitch Decks (a series of documents that showcase the company as an attractive investment opportunity) in the usual, boring way was causing a tangible drop-off in interest.

Not only that, they were also finding that no matter how they worded their decks and how many stock photographs they used, their new Search Engine concept was just not getting across. They needed a change of dynamic, and Cooked Illustrations needed to solve the issue of engagement and simplify the delivery of information, but without reducing complexity.

On top of that, we had to create a piece of narrative content that met the company’s existing branding but injected a level of visual flair that would make it easier for Coade3’s core products and services to firmly make a cozy home in a reader’s memory.
To that end, we needed a comic strip.

Coade3’s existing branding and look is austere and practical. Great stuff to show to lawyers, but not the material you can use to excite people about your very impressive technical feats!

By using their brand as a starting point, and playing around with colour hues and saturations, we were free to explore more interesting compositions and ideas.

This first illustration with the elevator metaphor was well-received. A test that allowed us to hone in on the look that we were going for. From this illustration, it was obvious that we needed characters in our story. While funny, this initial exploration lacked punch.

Developing from this stage, we employed the same style to explore one of Coade3’s main ideas - the Help Desk metaphor:

From a user’s perspective, a search engine is essentially a help desk. You ask something of someone at the desk, and they go and search for it somewhere in the mess of files.

But this system is faulty, too dependent on the user to know how the search engine operates and how to use it in the first place.

They are unmanned help desks, derelict and faulty. Full of data leeks! (Get it?)

Thus, we came up with these two simple illustrations. On their own, they communicate exactly what Coade3 was trying to elaborate on. But together, they told a story. Coade3 is not only helpful and available, but polygonal, it seems. Modern. Sleek!

By now, we had come up with a relatable, sequential story that would educate as it entertains.

Our playful exploration in the Help Desk metaphor gave us the idea to turn Coade3’s proprietary search engine into a polygonal “reader man”. This was after… well, digging for other ideas...

The Readerman: a helpful person who could find all the information you required.

The Robot Helper: who supported Readerman in tending the ‘grove’ of contextual information.

And, of course, the user.

The results were well received and effective in their implementation. You can see them in our Portfolio Page. 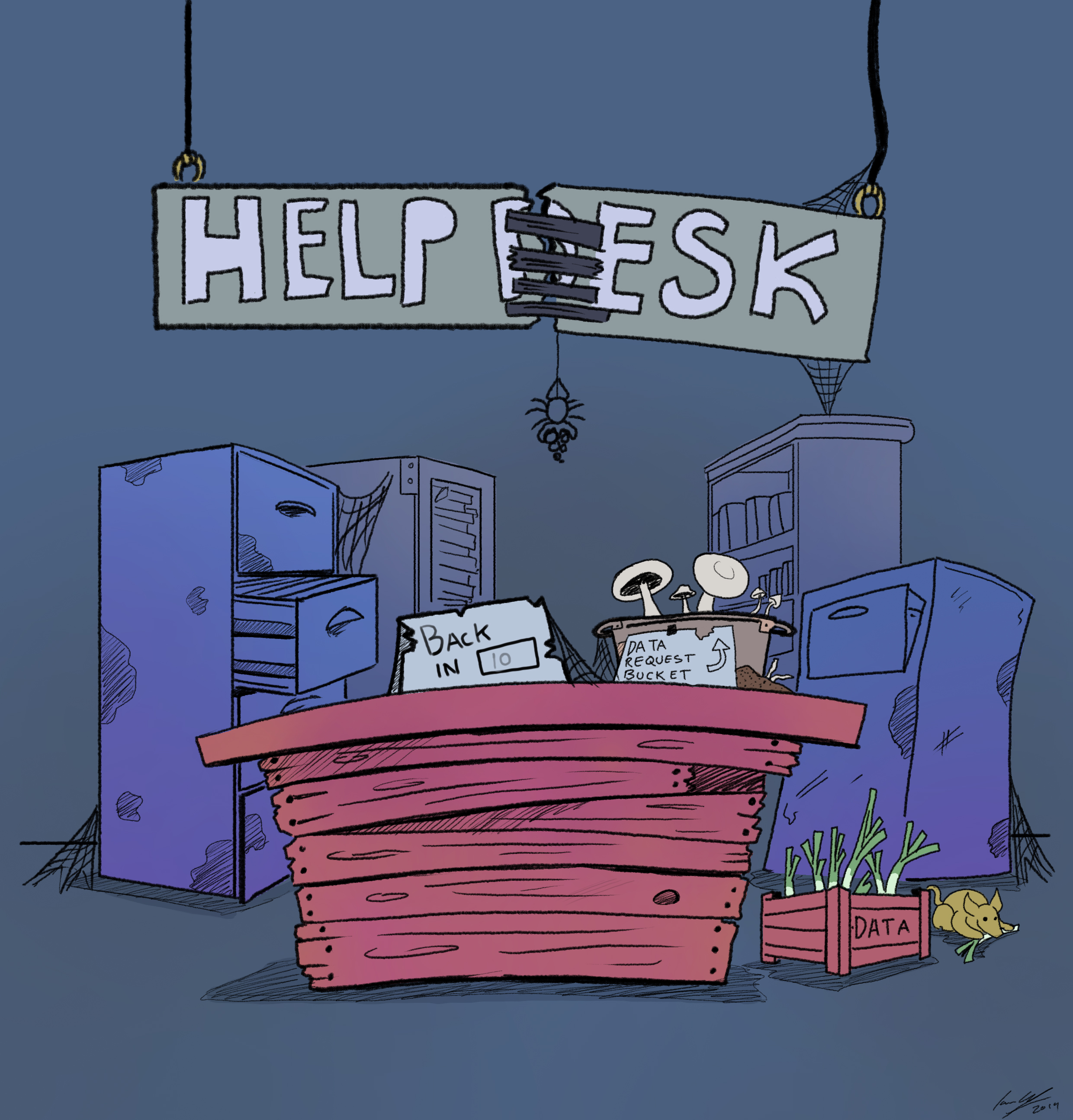 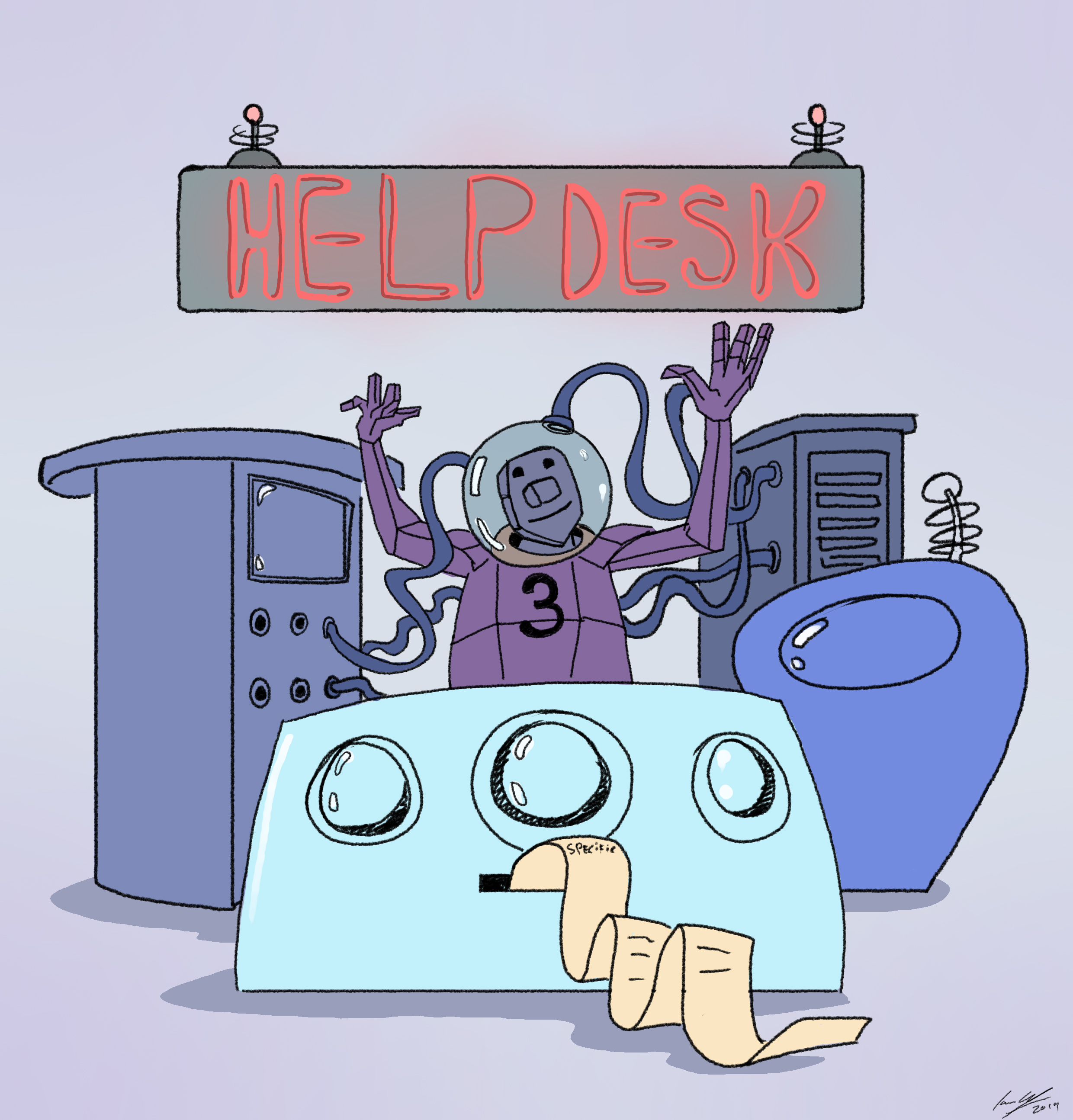